What is the ultimate blissful moment in life? For some, it is sipping a coffee, for others it is watching a thalaivar film.  For few others, drenching in rain and for certain others it could be making a delicious meal. Holding a new born's fingers, dancing for a tune, playing an instrument, watching a train cross, recording the nature's colors, observing fishes swim, writing, reading, having a perfect date, watch Dhoni's winning shot etc etc etc.  The list is endless and so are the taste and satisfaction levels of a human being.

But there is something else that makes you feel full.  The "pErinbam" item;  when you see your child accomplishing something.  It could even be as trivial as him/her saying their "abc's" for the first time.  Each kid is different and the pace at which they learn something new is different.  There is nothing under the sun that can supersede the happiness felt when the children exhibit an outstanding show.

Really?  Are the parents the most blessed when they see their children go places? There is just another thing that can actually surpass this pleasure i.e. the happiness that the children undergo when they make their parents proud!!

Unfortunately God is not so kind, he does not want everyone to be a parent; however he is so kind that everyone of us has a parent.  We sure can attain that blissful moment!

The greatest help a son(daughter) could do to his/her parent is that he should let everyone ask "How blessed is this man to have such an offspring?"

A big bow to him and to all the parents and children who have undergone that blissful moment.
Posted by Sh... at 10:05 AM No comments: Links to this post

I did not earn a Star of the year award at work; not a medal in sports; not reached any great milestone in personal life.  Yet, I was on cloud nine and feeling as though I conquered this whole world!  A moment of complacency.  You have to experience to feel!
Chinnu turned 6 in March.  It was winter and we had not been hosting a party for his birthday for last two years for reasons 1) he did not like to eat cakes 2) we had been shifting houses around this time and did not know kids of his age in the new place.  This year, when he turned 6, he wanted a party! He has good friends in the neighborhood and at the after-school care. Hence a party was planned.
Planes, Ninja Turtles, Spider man and other super heroes...What kind of a themed party should we have? He was not crazy about anything until a few months ago.  Of late, he had been into maps and flags and could spent hours at the computer trying to map flags to countries. Just a thought developed in my mind that I should go for the cake to have something around this.  Then I looked at the party city website and found that there was indeed an "International Flags" theme which probably is chosen by patriotic people to celebrate 4th of July or Veteran's day.  This fuelled the spark inside at this point.  I surfed the internet for cake designs with flags and maps and found a few.  They were not so appealing.  But sent them to the super-cool SUGAR CODE for guidance and was having an idea to get the cake made at Pittsburgh and get it transported to NJ as a friend was travelling to here.  Sugar code gave her valuable suggestions and we finally decided that it is safe to get the cake here for the fear of keeping it safe during the 6 hour road travel.
In the meantime I came up with another design and took it to a nearby bakery and they told me it would not fit in a quarter sheet.  I did not want a big cake as the number of kids were less and I was going to spend the rest of the weekend in Boston and did not want to waste stuff.  When I updated Sugar code about what they told me, she mentioned that there was an option called edible image.  Pictures could be imaged on an edible sheet and special printers at the bakeries could do this.  Fell at the feet of internet again and found that Walmart bakeries could get them printed out.
Well, thanking Sugar Code, I started finishing my design.  As I chose to write "Let this year be as colorful as these flags" on the cake, I wanted to pick flags of different shades to be on the image.  I chose Brazil and South Africa (they both have green shades) and sure wanted India (appreciate my patriotism) and USA as he is an American by birth.  Phew! they looked so awful when I put them on the computer.  Started the design all over again. Thank God, there were few flags which looked so similar.  I took Brazil and SA off my list and came up with a decent design.  It looked good and just had to be printed out.
In the meantime, there were chores at home; Wasn't taking any day off from work; and just 2 days left for the party.  I had placed the order with the bakery (with a design they suggested of course with flags but a completely different one from what was in my mind).
Could not do much the following day.  It was around closing time of the bakery, when I called them up to get their email address to forward the flags' image. That was then I asked if they would just have the image on the cake if I were to get it to them.  The one who I spoke with, was the store manager.  She listened to the whole story and was surprised to know Wal Mart was printing them.  It was decided that way and I was to get the image to them the next morning.
In the evening, I called up a nearby Wal Mart store and ran to the shop with the image in my jump drive.  By the time, the bakery personnel left and some Govindasamy was there and was giving a smile for every question I had. I wasted 45 minutes of my time. It was a working day and I still had to get some party favors.  I ran from here to there and came back home at 8.30 pm.  You know how evenings are on a working day and we ended up going to bed late.
The next morning, I went to the bakery en route work.  Met the manager and told her I wasn't able to get the sheet printed.  She told me that they themselves could print.  Ah!!!  And she showed me the pack of the imaging sheet.  I thanked her and emailed the image I came up with and picked up the cake next morning. 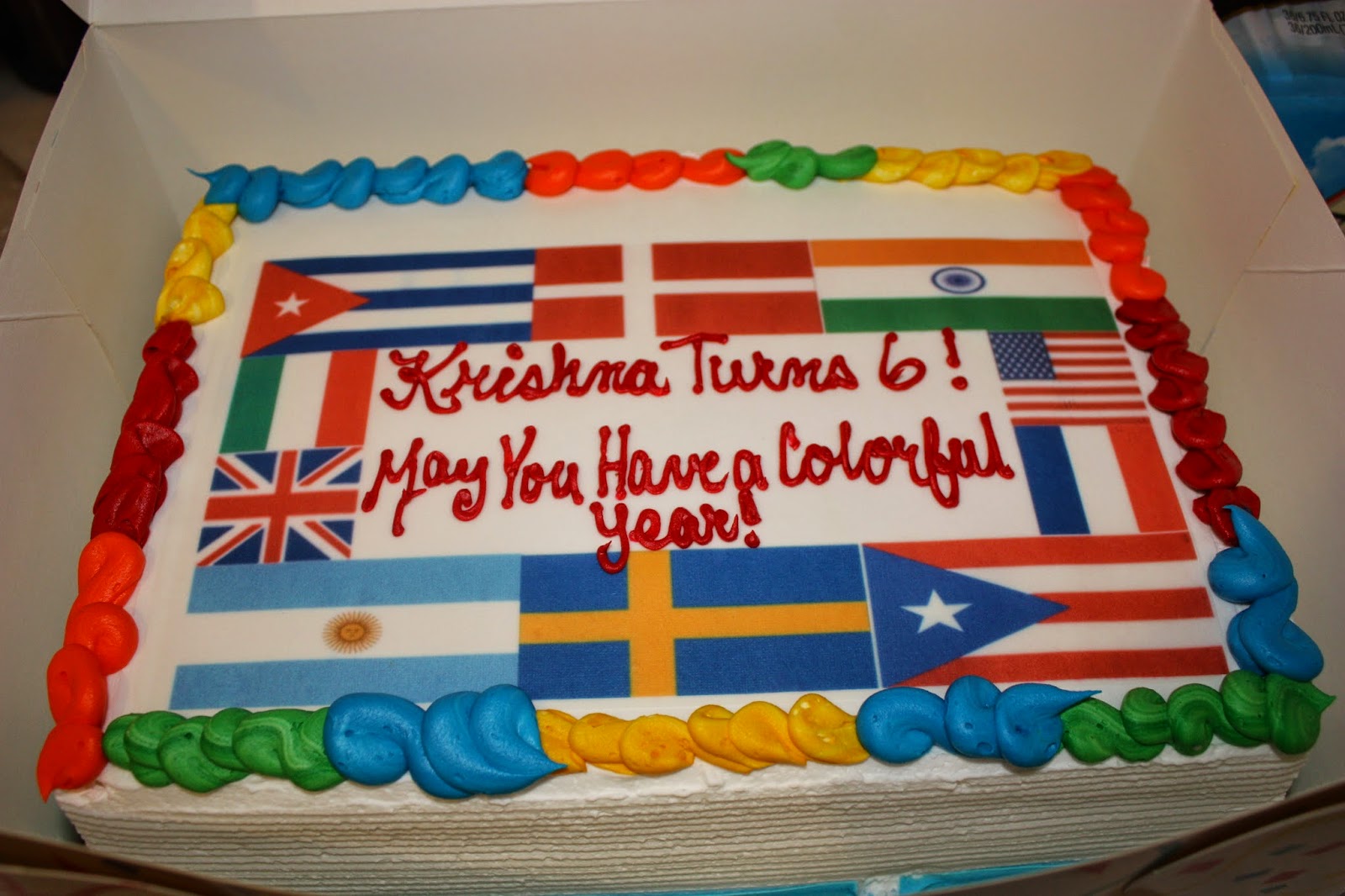 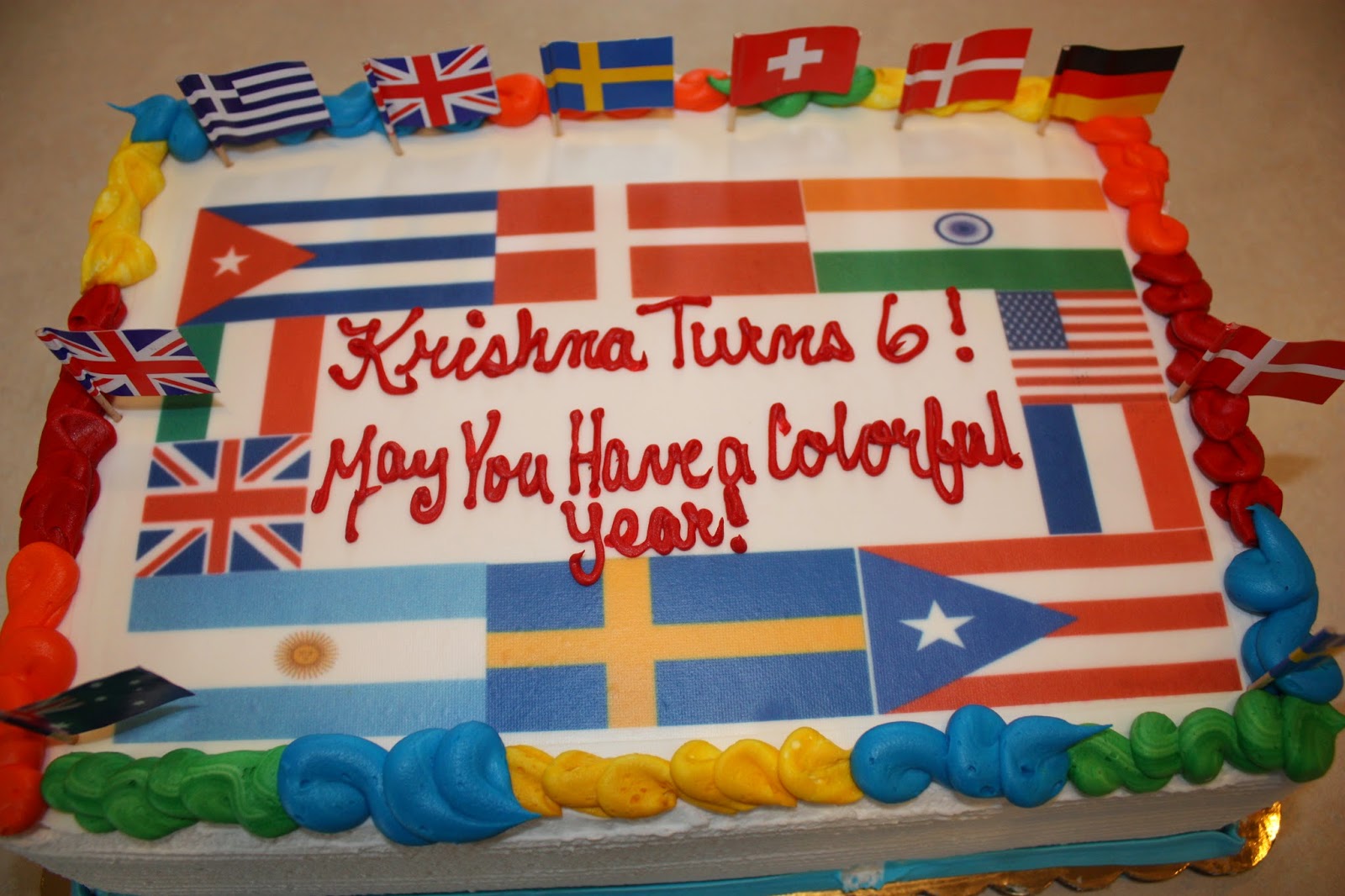 When I looked at it, I felt soooooooooooooo happy as though I myself made it from scratch.  I just can't explain the satisfaction I had. That's when I realized how these friend's of mine would feel when they see their brain child in front of their eyes.  That's such a wonderful feeling which words can not describe.  They are the blessed souls for they follow their passion!!!
And the lesson learnt from this party episode is the title of this post :))))
Posted by Sh... at 8:38 AM No comments: Links to this post